Posted on August 19, 2014 by stevenscountycattlemen 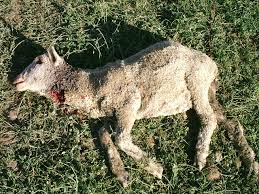 The sheep at the Dashiell ranch were reported to have bite marks to the neck, like the sheep pictured here.

For more than a year, the Washington Department of Fish and Wildlife has failed to share the location of the Huckleberry wolf pack near Hunters with producers or landowners in the area that may be affected. This omission allowed cattleman and sheep producer Dave Dashiell to unknowingly move his sheep into close proximity to the Huckleberry den site earlier this month. Since then, the Dashiell ranch has suffered 14 confirmed wolf kills on private leased ground, with another 9 kills suspected. The estimated financial damage to the ranch is over $5,000.

SCCA, the Dashiell ranch and several other producers had requested collar data on Washington’s expanding wolf packs in the summer of 2013, but those requests were either denied or met with red tape and stipulations that prevented the information from being shared.

“We are deeply concerned that the information was not shared with the landowner or with ranchers who have previously requested the information,” said SCCA President Scott Nielsen. “This situation would not have happened if the department wasn’t keeping critical information secret and was working with producers who needed that data for their ranch management.”

The sheep have since been moved some distance away from the den site and the Dashiells are again requesting collar data for the Huckleberry pack. The Dashiells have been involved in sheep production for nearly 30 years and regularly utilize predator deterrents for their herds including several guard dogs, a herder(s) who maintain a consistent human presence in the area and rotational grazing of the herd over the course of the summer months. If the ranch is forced to remove the sheep from their current grazing area, the only alternative is to pen the herd and feed hay until fall pasture is available, costing the ranch roughly $35,000 in feed alone.

“We know that the producer in this situation is doing all they can to keep their animals alive and prevent wolves from feeding on their herd,” Nielsen said. “But you can’t do that without good information. We are calling on the department to improve their communication on this issue. We are hoping for a positive outcome. ”